Does Marriage Have a Test Run? 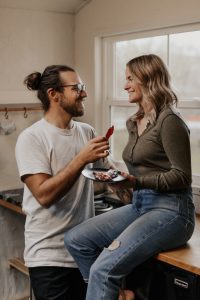 Living together before marriage makes sense, right? Why is it that people still have concerns about what appears to be such a reasonable concept? It makes sense to do a trial run before you commit for life, doesn’t it? Let’s find out.

In terms of statistics, there are some legitimate reasons to be cautious. Reports shown on CNN, Fox News, and MSNBC all show statistics that come to the same conclusion: Living together outside of marriage can actually hurt your relationship in the long run. The reason for this continues to baffle researchers because it is counter-intuitive.

Should these statistics have any bearing on your decision whether or not to move in with your significant other? Well, that’s for you to decide, but the facts are worth looking at. Here they are:

There are plenty of statistics out there on the issue of cohabitating. Before you make a life-changing decision, do some research and talk things over with your significant other and your friends and family. It always pays to make an informed choice, even if it is a counter-intuitive one.

The information provided here is general in nature.  It is not a substitute for a consultation with a medical professional. Before any medical procedure, it is imperative that you discuss your personal medical history, risks, and concerns with your doctor. If you have questions during or after a procedure, your doctor should be immediately contacted. Avenue Women’s Center is not an emergency center.  If you are experiencing severe symptoms, such as bleeding and/or pain, seek immediate medical attention.  Contact your physician, go to an emergency room, or call 911.

"Avenue Women’s Center was very informational. They listened so attentively. They never choose my options for me and let me decide." - Chicago resident

"What I liked best about Avenue Women’s Center is that you guys really listened and respected my beliefs & opinions." -  Des Plaines resident

"Excellent service to the client, very warm staff, friendly people, I loved their services, I would search for and would recommend the center 100%..." - Schiller Park resident

"The way that I was treated! I felt so comforted! So awesome to know that in such an unsure time, that you are welcomed & understood with open arms!..." - Plainfield resident

"I felt completely comfortable and felt that I was educated on every option to help my choice. I don’t think there could have been anyone better to help with the news." - Wheaton resident

"Nikki is very warm, welcoming and very pleasant. Not once did I feel uncomfortable or overlooked as I have at other clinic appointments. I appreciate her care and concern. Thank you for your gracious care today." - Broadview resident

"Everyone was kind and I can tell that they are concerned about what’s best for me and my situation. I was given enough information to help assist with my decision." - Glendale Heights resident

"Taking the time to talk to me and get to know me and my situation better. There was no judgement about my age." - Westmont resident

"Very very kind. They made me feel so safe. So welcoming. They helped me figure out what I want to do. Thank you so much. Bless your kind hearts." - Wood Dale resident

"I liked how easy everyone made my visit. I didn’t feel judged or awkward and I could be completely honest. I felt very welcomed, informed, and at ease. I will be recommending them to anyone in need in the future." - Darien resident

"It’s a welcoming and reassuring environment. I felt very positive while here. Thank you!" - Naperville resident

"I liked that I was listened (to) and my opinions about some things were accepted and not criticized." - Chicago resident

"Every single woman I came in contact with was very loving, caring and amazing. I am very satisfied!" - Park Ridge resident

"I think this is a great clinic, they were able to help me get a pregnancy test, asked the right questions which made me very comfortable and they were very helpful and compassionate. I would recommend anyone who needs help to come here…" - Glendale Heights resident

"Very friendly, welcoming, and (in) the discussion (I) learned all about different options. Great place to come." - Westchester resident

"It was very comfortable to talk and while waiting it wasn’t as nerve wrecking due to the conversation and the environment." - West Chicago resident

"I felt heard, she was caring, and talked me through all the what-ifs." - Lombard resident

"It was a really comfortable setting and wasn’t awkward or embarrassing." - Wood Dale resident

"They listen to you so well, they respect you more than anyone. I am so happy to be here." - Wheaton resident

"My consultant was very validating and made me feel very comfortable. She was excellent at responding to my needs. This was a positive experience and I greatly appreciate the open conversation." - Elmhurst resident

"​I have unfortunately been through this before and the experience was nothing like this. The time spent, the compassion given, without any kind of judgment truly made me feel so much better about everything. You truly understand the importance of your work here and as a person who needed to feel some kind of light and direction, I can’t thank you enough for everything you have done for me today." - Bartlett resident

"So welcoming and caring. Thank you for the amazing service. The clinic is clean." - Wheaton resident

"To share and to be heard and understood, to have a lot of information provided, information I didn’t even know I needed." - Lombard resident

"Listened to everything I had to say & comforted me in my concerns and made me feel it was going to be okay." - Lemont resident

"Sheila and Katy were extremely warm and friendly and seemed like they truly cared. Ultrasound tech was great and very knowledgeable. Excellent overall visit and the facilities are extremely clean and tidy throughout." - Naperville resident

"This place feels so welcoming and nice. My consultant was very patient and understanding so I didn’t feel scared to say anything." - Itasca resident

"Fast, attentive, easy to talk with and lots of great resources I would have not gotten otherwise. Good conversations too." - Carol Stream resident

"Really nice, polite, made me feel comfortable during my visit." - West Chicago resident

"Lindsay was very nice to me and very understanding. She gave me all the information I needed. I was very sad and worried when I got here, but after talking to her I felt very relieved and calm that everything was going to be alright. Thank you for your support." - Burr Ridge resident

“They made me feel completely comfortable!” - West Chicago resident, April 2020

“I greatly appreciated the way Hannah made me feel so comfortable!” - Crest Hill resident, April 2020

“Hannah was very nice. She listened to everything I had to say about my situation and gave good advice. I appreciated that she checked in with me to see how I was doing.” - Lyons resident, May 2020

“Katy was really nice, and supportive. She gave great advice, and information on what to do next.” - Wood Dale resident, May 2020

“They answered my questions without questioning everything.” - Wheaton resident, June 2020

“I felt very comfortable which was very important to me.” - Alsip resident, June 2020

“She was very caring and made me feel very comfortable and valued. I would recommend this location to anyone I know."  - Countryside resident, July 2020

“I really liked that the consultant was very caring and actually listened. It felt nice to talk to someone without feeling like (you're) being judged. Overall I really enjoyed the consultation and I would definitely recommend them.” - Bensenville resident, July 2020

"...She made me feel understood. It felt good to have someone to talk to and get the information I need at this time. I feel safe and in good hands to begin this journey..." - Plainfield resident, August 2020

“Hannah was super sweet, kind, and patient. She knew that it was a nerve-wracking process and talked me through everything, even while we waited for results.” - Elmhurst resident, September 2020

“So helpful and welcoming. Was very nervous but they helped erase it. Exceeded what I expected.” - Maywood resident, September 2020

“I like how understanding my consultant was and how I felt safe.”  - Wheaton resident, October 2020

"...From phone call to test time, she was exactly what I needed. Keep it up and know you’re making a difference.”  - October 2020

“I liked the welcoming feeling that you get when you walk in.” - December 2020

"I love that I had somebody that I can sit down and talk to about the thing I am going through.” - February 2021

"I’ve been to women’s centers before and always felt weird or awkward but today I felt good, happy, understood and I felt comfortable opening up. Thank you!!” - February 2021

“Very informative and the support is absolutely amazing. I love how I was set up for an appointment right away.” - March 2021

“Very nice people, treated not like a patient but almost felt like family, was caring and supportive.” - April 2021

“Terri gave me proper care and information upon different options, and also very understanding. Love that she took the time to communicate about my background.” - May 2021